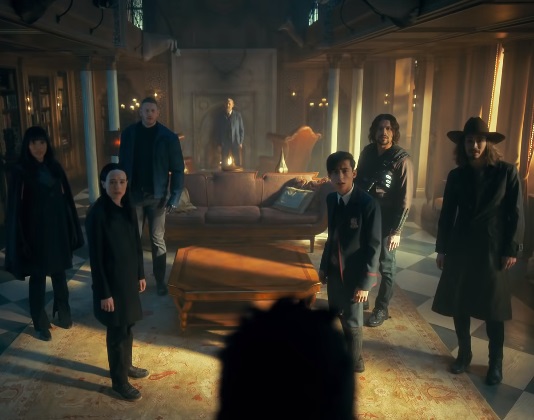 Netflix has released the trailer for the third season of The Umbrella Academy, created by showrunner Steve Blackman and based on the groundbreaking graphic novel series by Gerard Way and Gabriel Bá.

The upcoming season of the drama series, which revolves around a dysfunctional superpowered family, will take the members of the Umbrella Academy to a different timeline, where their adoptive father, Sir Reginald Hargreeves (Colm Feore), created another superhero team, the Sparrows.

The trailer reveals that the Hargreeves siblings are trapped in a timeline where Sir Reginald never adopted them and that it seems they created a time paradox that threatens to swallow the entire reality. “We caused a paradox. And that paradox is swallowing things,” Victor Hargreeves (Elliot Page) says in one of the scenes included in the trailer, which shows a battle between The Umbrella Academy and the Sparrow Academy.

The soundtrack is provided by The Struts’ version of “The Ballroom Blitz” (originally by British glam rock band The Sweet). The song, included on the soundtrack of the movie The Edge of Seventeen) is available for purchase on Amazon for $1.29.

Season 3 of The Umbrella Academy is set to launch on Netflix next month, on June 22.