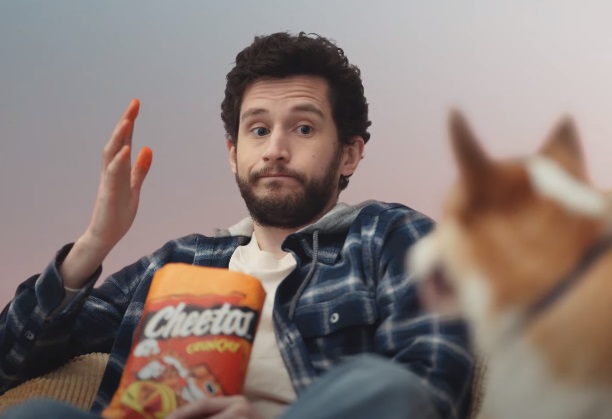 Cheetos has unveiled a humorous spot that aims to highlight that Cheetle is the inspiration behind hands-free technology.

The commercial, part of the brand’s “Hands Free” campaign, features various people eating Cheetos and trying to do various things, such as open a door, unlock the phone and drive the car. However, having their hands stained with Cheetle (the iconic orange dust), they have trouble carrying out those everyday tasks and come up with some ideas that inventors already had in the past. “Man, why don’t they make doors that like open themselves?” one man asks in front of a classic door that he needs to pull in order to get in. As they are transported into a different setting, where some doors open in front of them, his friend tells him, impressed, that he just invented automated doors. A man trying to vacuum, asks the device “Why can’t you do this yourself?”. The next shot sees him lounging on the sofa, with a bag of Cheetos, while a vacuum robot does the work itself. Another scene shows a woman in a library, having her phone ringing right when her hands are stained with Cheetle. As she thinks of a hands-free method to answer the phone call, she is transported into a different library, where she impresses those around her with the innovative way of unlocking the phone with her face. The ringtone she has is provided by the song “Dragostea Din Tei” (Maya Hi) by O-Zone.

The commercial ends with the tagline “If it’s hands-free, it’s a Cheetos thing” appearing on the screen.