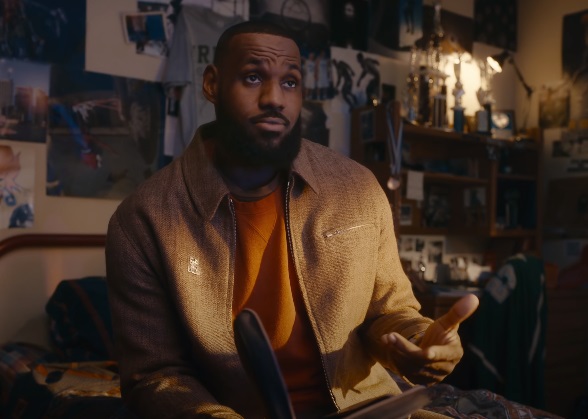 Crypto.com, a cryptocurrency platform based in Singapore, has enlisted LeBron James to star in its first-ever Super Bowl commercial.

Titled “The Moment of Truth,” the spot features the NFL star back in 2003 talking to his younger self and telling him about the things that exist in the future. The young LeBron is excited to hear that there are cordless headphones, electric cars and you can watch movies through your phone. When he wants to know if he is going straight to the league, a question published on the first page of newspapers, the LeBron from the future refuses to answer, arguing that he can’t tell him everything. However, he does have a piece of advice for the novice: “If you want to make history, you got to call your own shots”.

“We going to the League,” the two are saying at the end of the commercial, which also sees the tagline “Fortune favors the brave” flashing across the screen.

The soundtrack music is The Next Episode by Hold Up, Hey, originally performed by Dr. Dre & Snoop Dogg.

James is only one of the many celebrities starring in Super Bowl commercials this year. Among them there also are Doja Cat, Paul Rudd, Seth Rogan, Scarlet Johansson and her husband, Colin Jost, Peyton and Eli Manning, and more.