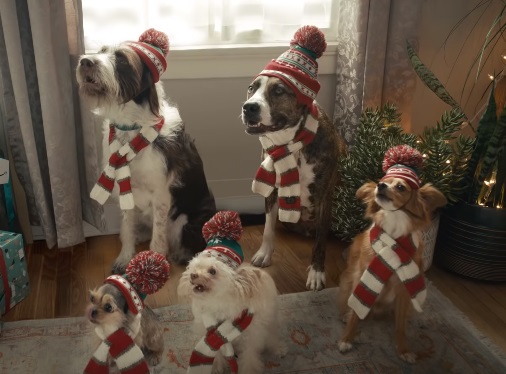 Amazon continues its “Spend less. Smile more.” campaign with a new installment. This time, the protagonist is Carl, a young man who becomes choirmaster.

The spot features Carl, who is a dog lover, apparently, judging by the number of dogs in his living room, getting some of the Cyber Monday Deals available on Amazon. The voiceover points out that, now, that he is saving big holiday shopping at Amazon, he is free to become Choirmaster Carl. After a sleigh bells crescendo, his dogs, wearing matching Christmas hats and scares, start barking USHER’s hit single “YEAH!”.

The commercial ends with the tagline “Spend less. Smile more.” flashing across the screen.

Amazon has been promoting its deals in several other similar ads. Will, an office worker who is holiday shopping at Amazon, turns into “Wonderland Will” and impresses his colleagues with stunning Christmas decorations and fake snow, which falls from above when he snaps his fingers. Betty, a grandmother who orders on Amazon several toys for her grandchildren, becomes “Bear Hug Betty” as she keeps the children in a long bear hug. Maureen, a woman who gets deals on housewares, becomes “Maureen the Merrier” and gives a huge piece of meat to her grandson during one of her holiday lunches.

Amazon offers consumers the possibility to browse a selection of holiday related items (the Amazon Christmas Shop) and find the perfect gift for their loved ones by using the Amazon Gift Finder, which allows them to identify gifts based on the interests of the person they are buying for or on the sum they want to spend.