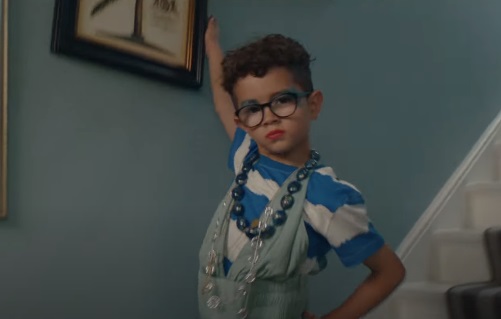 John Lewis & Partners have released a new advert to promote its Home Insurance, which gives customers the option of accidental damage cover (an optional add on with Gold, Silver and Bronze Buildings and Contents cover).

The spot, created by adam&eveDDB, features a young boy who dressed up in his mother’s clothes, jewelry, shoes and make-up and goes downstairs, wreaking havoc throughout the house. Knocked vases and picture frames, nail varnish along the bannisters, and paint on the carpet are only some of the damages he causes as he dances around, freely expressing himself.

The advert is set to the tune of the 1982 single “Edge of Seventeen” by American singer and songwriter Stevie Nicks (from her debut solo studio album, “Bella Donna,”) and concludes with the strap line “Let Life Happen”.

The campaign is also set to run on YouTube, streaming services, social media channels, and on digital screens outside Waitrose stores.

John Lewis launched its new flexible home insurance earlier this year, as well as its first ever investment products. It has also expanded point of sale credit to all channels as part of its attempt to quadruple the size of its financial services business.