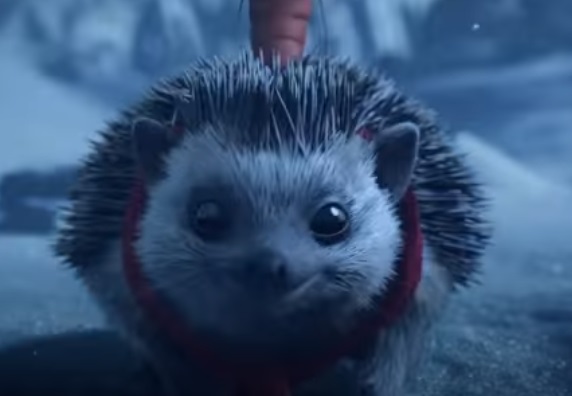 After the teaser released last month for its Christmas ad, in which Kevin the Carrot is accidentally ejected from a plane by his turkey co-pilot, Aldi UK has released its Christmas ad, featuring the continuation of Kevin’s journey.

The spot also features Kevin’s wife Katie and kids – Jasper, Chantenay and Baby – preparing for Christmas at home, with little carrot Baby saying “It’s not Christmas until my daddy gets home”.

Kevin meets a hedgehog, named Harry, who is willing to help him get back home and gives him a piggy back, but as they travel across the snowy landscape (with the theme of Pirates Of The Caribbean serving as soundtrack) they end up in a big fall. Eventually, everything ends well because Santa finds them in the snow and takes them to Kevin’s home. However, at this point, another movie reference is made, as Father Christmas does not transport them in his sleigh but on his bicycle, with which he flies through the air, making possible for Kevin’s kids to see the silhouette across the full moon. The soundtrack from Home Alone is also used.

Kevin is thus reunited with his family in time for dinner, thanks to Santa (who is played by Jim Broadbent in the UK version of the ad). There is also a version for Ireland, with Star Trek actor Colm Meaney playing Father Christmas.

“The magical moment was finally here, Christmas together with those you hold dear,” Santa says at the end of the advert.