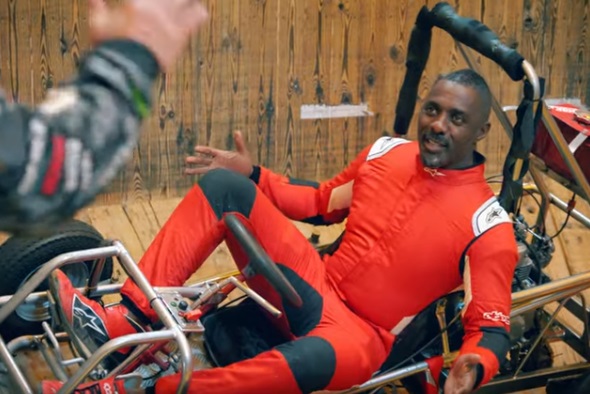 Quibi has released the trailer for its new car-stunt series Elba vs. Block.

The show sees the award-winning actor and renowned rally car driver Ken Block in the “ultimate crash course”. The two are challenging each other to automobile skill tests, such as power, speed, agility, balance, precision, reflex, accuracy, focus and more. One of the challenges consists, for instance, in seeing who can drive a car on two wheels the furthest. There will be other jaw dropping stunts, such as the Flaming Obstacle Course and the Wall of Death.

The songs used in the trailer are “The Flower Duet” by Katherine Jenkins and “Legendary” by Christian Reindi feat. Kaleb Mitchel.

Elba vs. Block, consisting of eight episodes, is coming to Quibi April 13.

In the past weeks, Quibi, which launched on April 6, dropped trailers for specific shows and movies, including the “SKRRT With Offset” car series, hosted by Migos member Kiari “Offset” Cephus, Quibi’s lineup also includes the survival thriller Survive starring Sophie Turner, the horror thriller The Stranger, the remake of the Harrison Ford film The Fugitive, starring Kiefer Sutherland, the cat-and-mouse thriller Most Dangerous Game, starring Liam Hemsworth and Christoph Waltz, and more.

Designed to be viewed on mobile devices with content that can be consumed in 10 minutes or less, Quibi is available with a two-tier pricing system – $4.99 with ads and $7.99 without ads.

The entertainment platform (created by Jeffrey Katzenberg and Meg Whitman), whose name comes from “quick bites,” made its commercial debut with a 30-second Super Bowl commercial right after the kickoff.