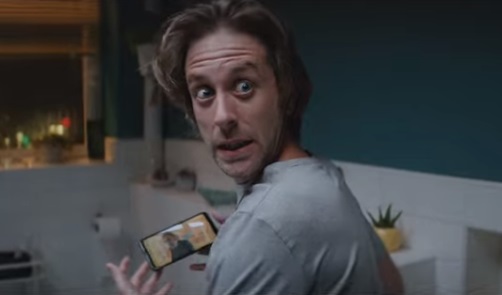 Amazon advertises its Prime service, which provides members with free One-Day delivery, Video, Music and more, in a new commercial.

The spot, titled “Binge Cheat with Prime,” features a woman wearing silky pajamas, who left the bedroom, where they have the Echo Show on the night stand, in search for her husband, who is not on his side of bed after midnight. It turns out he was in the bathroom, binge cheating on her with Hunters, an Amazon Prime series starring Al Pacino.

The song used in the ad is the 1975 song “How Long” by the British group Ace from their album Five-A-Side.

Created by David Weil, Hunters is inspired by a number of real Nazi hunters through the decades, and follows a diverse band of Nazi hunters living in 1977 New York City who discover that Nazi war criminals are conspiring to create a Fourth Reich in the U.S. The series premiered on February 21, 2020 on Amazon Prime Video.