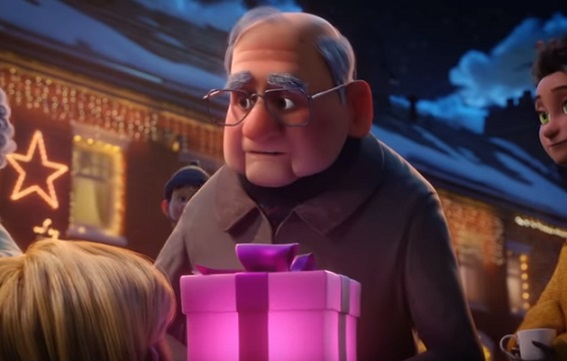 Very.co.uk has launched its Christmas advert and encourages people to “get more out of giving” this holiday season.
Created by St. Luke’s London and titled “Pass the Parcel,” the spot, which follows last year’s “Elsie’s gift,” shows how the residents of Chester Street, including Alfie, Mrs. Bumble, the cute lady who’s been making cameos in Very Christmas adverts since 2016, and Elsie, the astronaut from last year’s Christmas advert, embark on a mission to deliver a glowing purple gift box to their elderly neighbor Sidney.

The nicely-wrapped parcel is passed from one to another until it’s placed by the little girl from the 2017 advert which saw her toy wolf Ulfie come to life, on a remote-controlled car and driven down the street.

The film ends with Sidney, accompanied by his dog, receiving his present from a remote-controlled truck and spending Christmas with a group of neighbors. “Get more out of giving,” the voiceover says at the end of the advert, which is scored by a cover of Rudimental’s 2012 hit “Feel The Love,” performed by The Social Singing Choir.