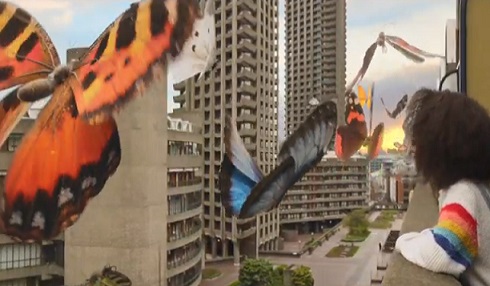 The national campaign running in the UK to inform people about the new smart meter rollout, The Campaign for a Smarter Britain, continues with a new advert, aimed at highlighting that smart meters can’t solve climate change on their own but with the smarter, more energy efficient grid they help to create, they’re a start.

“I want to live in a world where we still have polar bears. I want to live in a world where we can breathe cleaner air. Where we use more sustainable energy. Where we’re doing everything we can to save what we have,” several kids say in voiceover on the 60-second ad, which features them daydreaming about their wishes. Three polar bears are seen walking down a little girl’s white duvet, a young boy is seen jumping up in the air and getting his head among the clouds, two teenage siblings are seen lying down on a green field, near wind turbines, and a girl is seen at her balcony, in a big city, watching huge colorful butterflies as they are flying in front of her.

Smart meters can’t solve climate change on their own, but with the smarter, more energy efficient grid they help to create, they’re a start,” the voiceover says at the end of the advert, urging then viewers to search “I want a smart meter” online or call 0300 131 8000.

The soundtrack music is “We Just Won’t Be Defeated” by English band The Go! Team, from their debut album, “Thunder, Lightning, Strike,” released in 2004.

Smart meters are the new generation of gas and electricity meters coming with an in-home display screen that shows you exactly how much energy you’re using in pounds and pence, in near real time, how much energy was used in the last hour, week, and month (and what it cost), whether your electricity use is high, medium or low and will give updates in almost real time for electricity and every half hour for gas. Installed by energy suppliers in every household in England, Scotland, and Wales, they will bring an end to estimated bills, since they show a digital meter reading and automatically send the reading to your energy supplier at least once a month. Everyone will be offered the opportunity to upgrade to a smart meter by their energy supplier. Smart meters will be provided and fitted by your energy supplier, along with a handheld in-home display, at no extra cost.