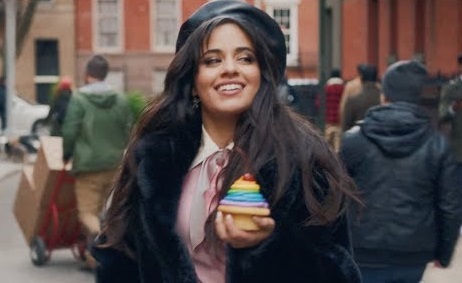 Mastercard has teamed up with Camila Cabello for a new campaign, aimed at highlighting that “Every day is a chance to make someone’s day” and that, when you use your Mastercard, you could get surprises to share.

The 21-year-old Cuban-American singer stars in a new commercial shot in New York City, that features her wearing a bow-embellished silk crepe shirt, black skinny jeans, glitter ankle boots in blush, an oversized faux fur coat and a black leather beret, walking down the streets and surprising people around with various things, such as a cup of coffee, a beret, and a cupcake, by paying for them with Mastercard. “Use your Mastercard and you could get surprises to share, from cupcakes to hanging backstage with me. So you can start something priceless,” Camila says in voiceover at the end of the spot.

Serving as the soundtrack is her 2017 hit single “Havana,” which features guest vocals from American rapper Young Thug.

On February 6, the singer held an exclusive pre-Grammys show just for Mastercard cardholders, in LA at Orpheum Theatre. Other exclusives will include access to Camila’s yet-to-be-announced 2019 tour and a chance for fans to join her at the tour stop of their choice and meet her in person.