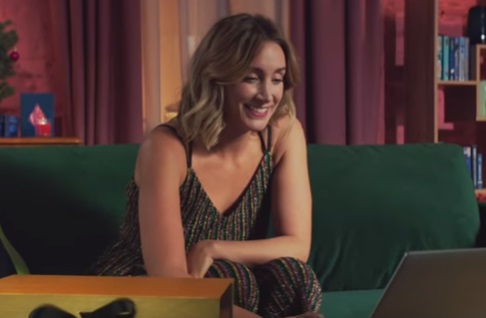 Debenhams has launched its Christmas ad campaign, titled “Do a Bit of You Know You Did Good”, featuring several “do-gooding” gift givers who experience a moment of joy knowing that they have offered the perfect gift to their dear ones.

One of the four spots released by the UK retailer, dubbed “The Savvy Girlfriend,” features a young woman in her boyfriend’s apartment, watching some photos of him in different places in his spare time and realizing, as she puts her Christmas gift for him on the table, that she found the perfect things for him and can’t help to make a “celebratory” hair-flick.

Narrated by actress Jenna Coleman (known for her roles on Victoria, Dr Who and The Cry), who urges you to “do a bit of you know you did good,” the advert also features the 1991 hit single “Star” by English singer Kiki Dee.

The other spots, titled The Star Party Guest, The Thoughtful Uncle, and The Knows You Best Friend, are also running across TV, digital, social media, and print. Their debut on TV took place on Friday, November 9, during Gogglebox on Channel 4.

The department store provides a series of gift ideas for men, women, couples, and kids, as well as Christmas trees and decorations. It also has various offers, such as 3 for 2 Mix & Match on hundreds of gifts. Among the festive treats you can indulge with are Christmas-themed jumpers, stocking fillers, advent calendars, and more.