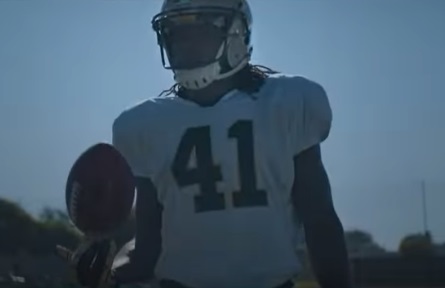 Microsoft has partnered with NFL superstars Melvin Ingram, Larry Fitzgerald, and Alvin Kamara to launch a new ad campaign, aimed at showcasing how Microsoft Surface helps them to pursue their off-the-field side hustles and accomplishing their dreams.

One of the spots features Larry Fitzgerald, who – when is not busy training for the NFL season, is often traveling the world and taking stunning photos. “So, my day job is wide receiver. We all have side hustles. My side hustle is my traveling business, Nomad Hill,” the Arizona Cardinals’ wide receiver says, revealing he loves to travel and photography and he wanted to “give other people that may have similar passions the ability to travel”. Of his business, he says it aims “to provide unique experiences, things that are kind of off the beaten path.” He also reveals that what he loves most about photography is that “you’re able just to capture something, but you never forget that moment”.

“Technology is a big part of all of our lives at this point. From work to home to my passions, the Surface is there with me that whole time. When I’m traveling I’m able to download all my photos. It moves like I move. It starts with the dream. One idea, you just continue to water that seed and nurture it. To be able to share that with 10 or 11-year-old children and hopefully it inspires them to adopt the passion that they love,” Fitzgerald also says, while on screen he is seen working at his Microsoft Surface laptop and talking to children about some of the photos he took in the various places he has visited.

The commercial ends with the onscreen lines “Make Adventure Happen” and “Make Believe Happen”. Microsoft Surface is the Official Laptop of the NFL and is also endorsed by Melvin Ingram and Alvin Kamara, who are also pursuing their off-the-field side hustles with the Microsoft Surface by their side. In the main campaign film, titled “Places,” Ingram, who’s also a rapper (he began rapping at 10 years old), is heard performing “Oh, the Places You’ll Go!” by Dr. Seuss.

Surface is not only used by players, but also by coaches and refs in every NFL game for drawing up new plays on the sidelines, instant replay on the field, and more.

The new Surface Pro 6, now with the latest 8th Gen Intel Core Processor, features up to 13.5 hours of battery life, allowing NFL coaches, players, and refs to unplug, pack light and get productive all day long.