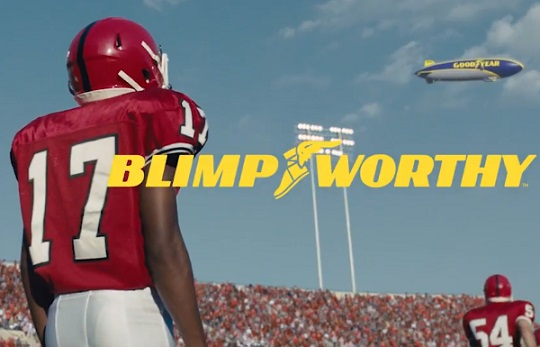 Goodyear inspires football fans to “Be Blimpworthy” in a new ad, released to celebrate the decades in which the Goodyear Blimp has signaled the magnitude of games.

The 15-second spot features a young man focused on playing in front of thousands of fans at a big college football venue as the blimp floats above. “The Goodyear blimp doesn’t show up just for anybody. So don’t be just anybody. Be Blimpworthy,” the voiceover says, adding the tagline “More Driven”.

The 30-second version of the spot is set to make it debut on Saturday, September 1, across games on ESPN, ESPN2 and ABC. The tire company’s roots in college football continue to grow with its iconic blimp aerial coverage, which was first provided in 1955, during Rose Bowl, its title sponsorship of the Cotton Bowl Classic played at AT&T Stadium in Arlington, Texas, and its sponsorship of the College Football Playoff. This year, the tire company will use all three of its newest fleet of blimps to provide aerial coverage of college football’s biggest matchup throughout the season.

Todd Macsuga, general manager of brand marketing at Goodyear, said that “‘Be Blimpworthy’ is rooted in the idea that the blimp only shows up for the most marquee matchups, a level only reached by hard work and perseverance”.