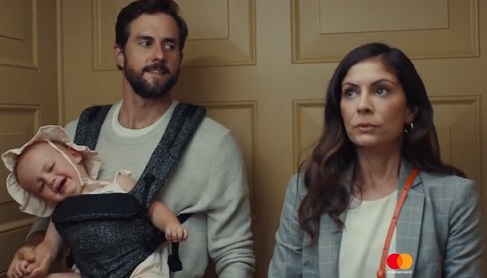 “It only takes a moment to start something priceless,” this is the idea behind the latest Mastercard commercial, titled “Keep Moving”.

The spot, set to the rhythms of a catchy tune that encourages people to keep on moving, features a father carrying his little daughter in a baby carrier through the city as he runs some errands. Having the kid with him doesn’t prove to be difficult since he pays easily with his Mastercard everywhere. Back home, when he puts the baby on the rug, he and his wife are surprised and delighted to see her stand up and make her first steps alone.

The Start Something Priceless campaign, aimed at inspiring people to take a first step in pursuit of their dreams, was launched in January 2018. The movement kicked off by showing how passions like sports and music can help people deal with and overcome personal challenges and confront bias to reach their goals and transform adversity into strength. As part of its partnership with the World Food Programme, the company, committed to delivering 100 million school meals, has installed, around Paris, interactive donation billboards that allowed passers-by to donate a week of school meals for one euro via contactless payments, simply by holding up their phone or card.