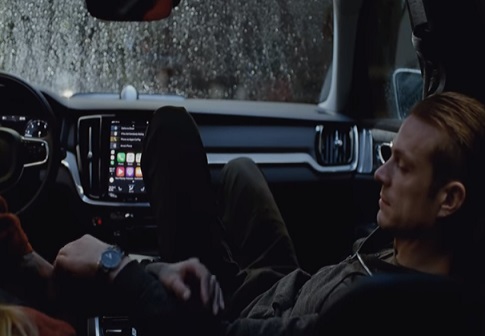 Volvo has released a series of ads to give people a glimpse into the new Volvo V60, described as “a versatile family estate car that helps you make the most of every moment”.

The 10-second spots feature a single dad holding his younger kid, who fell asleep during his sibling’s school play, and then putting him in the backseat of a Volvo V60 and taking him home, a young couple sleeping in their Volvo V60 in the middle of nature, a senior couple enjoying the night view from the backseat of a VolvoV60, as well, a married couple who get over their pride and decide to choose make up over break up, a couple bringing home their newbown child, as well as families, like the Sanchez family, who buckle up their baby in a rear facing seat, the Brammes, who are on a road trip with their toddler, and others.

One of the spots features Swedish American actor Joel Kinnaman, who’s playing the lead role in the Netflix science fiction series Altered Carbon, sharing the silence of the night, in a Volvo V60, with his husband, Swedish tattoo artist Cleo Wattenström.

The tagline “Protect What’s Important To You flashes across the screen at the end of the commercial, which is scored by “If You Got Somebody Waiting” by Joel Alme, from his 2010 album, “Waiting for the Bells”.

The new Volvo V60 features an advanced chassis, powerful engines (diesel and petrol engines and the T8 Twin Engine plug-in hybrid, which offers electric, zero-emissions travel) and a choice of driving modes that put driver “at the centre of an engaging driving experience”, according to the automaker. The interior boasts a combination of Scandinavian craftsmanship and smart technology, five supportive seats, one of the largest load compartments in the segment, with a volume of 529 litres to the top of the rear backrest, and “intuitive technology that makes life easy and enjoyable”.