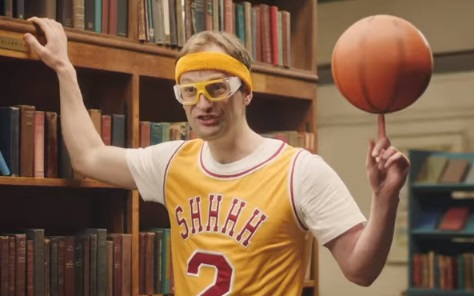 Great Tastes of America is back at McDonald’s in the UK. The fast-food restaurant chain has released a new ad, urging viewers to go all out for the New York Stack, available for a limited time.

The 30-second spot features a young woman asking shyly her librarian colleague to go to lunch. The latter, who’s on a ladder, arranging books on a shelf, tells her that “Great Tastes of America is back at McDonald’s” and that he fancies the New York Stack. When she wants to know what’s that, the guy starts listing the ingredients, namely “two beef burgers, bacon, chunky coleslaw, pickles, cheese, all in a sesame seed bagel.” As he mentions them, he gradually turns into a hot baseball player who’s spinning the basketball on his index finger while hanging from the hoop. The woman turns, instead, into a cheerleader and makes a slum dunk.

At the end of the spot, the voiceover informs that the New York Stack will be available until 15th May.