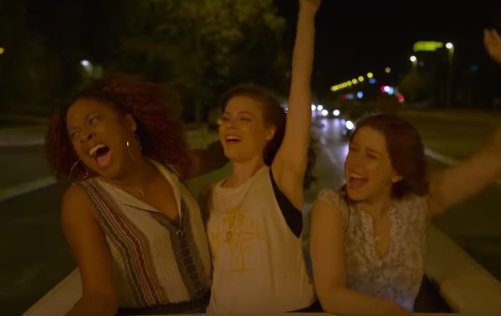 Gillian Jacobs chases a handsome DJ all the way to Ibiza in the Netflix upcoming film “Ibiza”, scheduled to arrive on the streaming site at the end of this month, on May 25.

Written by Lauryn Kahn and directed by Alex Richanbach, the film follows Jacobs’ character, Harper, as she embarks on her first work trip to Barcelona, accompanied by her two best friends, Leah (Phoebe Robinson) and Nikki (Vanessa Bayer). There she meets the DJ in a club and, when he leaves, she decides to leave the city, too, in the company of her fellows, to see him again, in Ibiza, where she finds out he will have a gig.

The trailer reveals quite a lot, from the reason her boss sends her on the trip to Spain, to the moment her best friends announce her they will join her, to the encounter with the “hot” DJ, Leo West (played by Richard Madden), in a night club. “We had like a real connection,” Harper tells Leah and Nikki after the night out. When Leah tells her he is in Ibiza and holds an “empowering” speech (This is destiny. Some people land on the moon. Others cure diseases. You smash this DJ.”), Harper decides to give it a try and follow Leo to Ibiza. “If this is as good as this trip gets, this is pretty good,” she says while watching the sunset from a nice spot. The trip apparently doesn’t end when it should, the girls choosing to stay and party hard.

The song used in the trailer is the 2012 single “Pound The Alarm” by Nicki Minaj, from her second studio album, “Pink Friday: Roman Reloaded”.