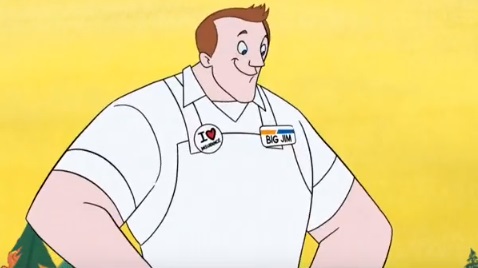 Progressive Insurance presents Flo’s colleague Jamie as “Big Jim” in a new commercial, aimed at highlighting that Big Jim is here for your home and auto.

The 30-second animated spot features Big Jim helping people fix their home and auto-related issues, like flood and fire, while in the background the following song is heard: “He’s got legs of lumber and arms of steel. He eats a bowl of hammers at every meal. He can hold your house in the palm of his hand. He’s your home and auto man. BIG JIM. Got you covered. GREAT BIG JIM, there ain’t no other”.

The end of the spot sees Jamie near a car damaged by a fallen tree, being asked by the car’s owner if this is covered. He confirms and assures her he’s taking care of it for her right away, but it turns out he’s not quite Big Jim: he takes out his phone and makes a call, asking for help.

Jamie, played by actor and writer Jim Cashman, started appearing in Progressive ads in 2017, alongside Flo (actress Stephanie Courtney), who’s been a company’s spokeswoman for years. In one of the spots, dubbed “Jamie’s Twin”, he even had a doppelganger, played by British actor Jack Turner.