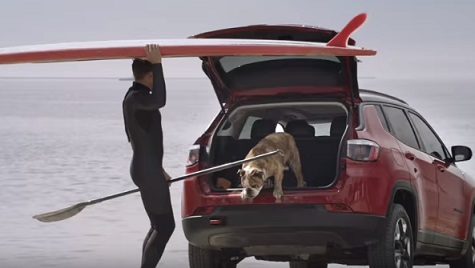 Jeep showcases the new Compass in a commercial aimed at highlighting that this SUV “was built for all of life’s trails”.

The 30-second spot illustrates this idea by featuring people who have the Jeep Compass by their side while “managing” various aspects of their lives, including romance, meditation, adventure, and more. Equipped with the Jeep Active Drive and Jeep Active Drive Low (Trailhawk only) 4×4 systems, the Compass proves, in the ad, that it is ready to take on the trails and any weather condition it may encounter, from muddy roads, to sand, and other types of terrain. Participants at a mud run, a surfer taking his dog to ride the waves together, a DJ driving through the rain to get to a club for a gig, a woman going outside the city to practice yoga in the middle of nature, and a couple enjoying a night date with a wonderful view of the city are all seen throughout the ad, with the Jeep Compass being “in the picture” as well.

“Life has a million trails. The Jeep Compass is built for all of them,” the voiceover says at the end of the commercial, which is set to the rhythms of the 2016 single “Unstoppable” by the American indie pop band The Score, from their debut album, “ATLAS”. This song was also featured in the 2017 film Power Rangers, in episode 7 of the 2016 Fox TV series Ya mum is the bomb, and was also used as the theme song for the 2017 World Series of Poker (WSOP) Main Event.

Customers can now get, during the brand’s Spring Sales Event, 0% APR for 60 months on the 2018 Jeep Compass.