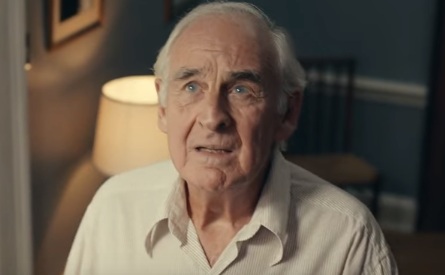 UK-based company Rightmove, that runs the UK’s largest online real estate portal and property website, has launched a new advert, aiming to inspire people “to make a fresh start in a home that works for them as life moves on”.

Created by advertising agency Fold7 and titled “Life’s Steps”, the 60-second spot opens with an old man in his home being asked by his wife, who’s upstairs, to give her a hand. He stops for a moment in front of the stairs, sighs, and then proceeds to walk up, recalling, on his way, lots of times he went up those stairs through the years. He’s seen carrying many things, including the vacuum cleaner, a sports bag, a ladder, luggage, bed linen, Christmas decorations, a quite heavy tool case, and a tray with breakfast for his wife. When he’s almost getting to his wife, she is heard telling him “Oh, don’t worry, darling!”, so he turns around to go down the stairs again.

The end of the advert sees the empty house and a growing family moving in. The couple’s kid, a toddler, points to the stairs and then sets off to walk up. The company’s tagline, “When life moves, make your rightmove”, is also seen.