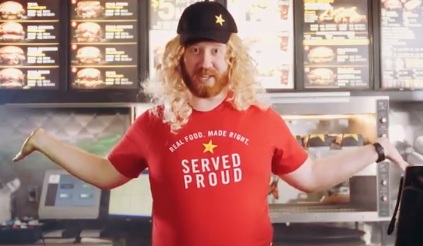 Hardee’s has released a Holiday anthem dreamt up by The Sizzle Boys, a duo consisting of Ben and Chad, passioned about music and comedy, to promote the limited-time $5 All Star Meals.

The two artists have used both music and comedy to sizzle the Hardee’s brand this holiday season and the result is a two minute and a half music video starring The Sizzle Boys and, of course, the $5 All Star Meal. Titled “What a Wonderful Life”, the song aims to highlight that, at Hardee’s, you can find “something big and saucy”, “something fresh and flossy”, and show what the All Star Meals includes, namely onion rings, chicken tenders, charbroiled double cheeseburgers, chicken filet sandwiches, hot dogs, natural cut fries, chocolate chip cookie, and a drink.

The fast-food restaurant chain’s ad campaign also includes a series of national TV spots going directly after the competition, with the brand’s new boxes alongside other brands’ value offerings, highlighting the shortcomings of the competitors. The $5 All Star Meals, available on menus nationwide at both Carl’s Jr. and Hardee’s restaurants, consist of some of the most popular menu items, like Charbroiled double cheeseburger, grilled hot dog, chicken fillet sandwich, hand-breaded chicken tenders, onion rings, natural cut fries, and fresh-baked cookie, in four different meal options.