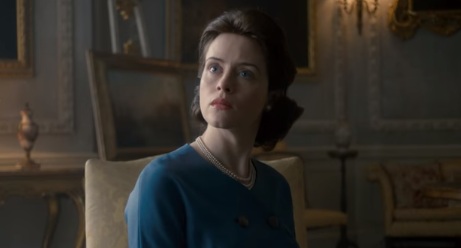 Netflix has released the official trailer for the second season of its hit series The Crown, scheduled to premiere on 8th December.

The upcoming season, consisting of ten episodes, will cover the period between 1956 and 1964 and will be the last to feature Claire Foy as Queen Elizabeth before Olivia Colman replaces her as the Queen in her late 40s thorough her early 60s.

The trailer features Queen Elizabeth, who’s told she “married a wild spirit trying to tame him”, saying to Philip, whose rumoured infidelities will be a main focus this season, in one of the scenes, “This restleness of yours, it has to be a thing of the past.” Princess Margaret, whose marriage to Lord Snowdon will also be in the spotlight, is seen speeding through London on the back of a motorbike and is heard saying: “I know who I am, a woman for the modern age. Free to live, free to love and free to break away.” The Queen is heard, in the final scene, asking Philip “There is no possibility of my forgiving you. The question is, how on earth can you forgive yourself?”.

The song used in the trailer is the popular romantic love song “I Only Have Eyes for You” written in 1934 for the film Dames where it was introduced by Dick Powell and Ruby Keeler. It was recorded by several artists, including Ben Selvin (in 1934), The Flamingos (in 1959), The Lettermen (in 1966) and Art Garfunkel (in 1975).