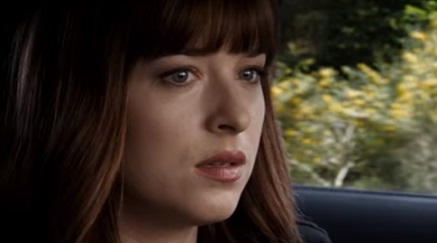 Jamie Dornan and Dakota Johnson reprise their roles as Christian Grey and Anastasia Steele in the third and final chapter based on the worldwide bestselling “Fifty Shades” phenomenon, Fifty Shades Freed.

A first teaser trailer has been released for the movie, which is adapted by Niall Leonard and directed by James Foley, featuring the couple getting married and jetting off to a European honeymoon. A glimpse to Anastasia’s lace, long-sleeved wedding gown is given and a voiceover of Christian is heard delivering his wedding vows. “I promise to trust and respect you and to keep you safe for as long as we both shall live.” – he says, while his bride is seen getting ready for the big day. He also tells her that all that he has is now hers, including the private jet they’re using to go on their honeymoon. Their happy lives as husband and wife take a dramatic turn, though. Christian is seen wielding a weapon, Anastasia finding a gun under his table and, in another scene, being accosted with a knife, in the apartment they’re staying, by a man.

The full trailer is set to be released in November, while the film is due out on Valentine’s Day 2018.