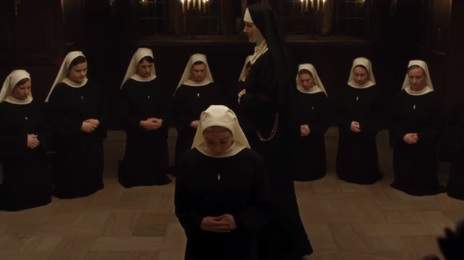 Sony Pictures Classics has released the official trailer for the upcoming drama film Novitiate, about nuns
coming to terms with aka Vatican II (the Second Vatican Council).

Written and directed by Maggie Betts, the film spans over a decade – from the early 1950s through to the mid-60s – and follows Cathleen, a 17-year-old girl raised by a non-religious, single mother in rural Tennessee, who follows her dream of becoming a nun and goes to a convent.

The cast includes Margaret Qualley as Cathleen, Sasha Mason as 12-year-old Cathleen, Julianne Nicholson as her
mother, Melissa Leo as the convent’s stern Reverend Mother, who informs the girls that warns the girls that her voice will serve as a stand-in for God’s on Earth, Dianna Agron, Liana Liberato, Rebecca Dayan, Maddie Hasson, and Morgan Saylor as sisters at the convent, and others.

The trailer reveals that the girls arriving at the convent are supposed to spend six months as postulants and
after that they’ll turn to the novitiate. The Reverend Mother (Melissa Leo) says, in one of the scenes, featuring
a conversation with Dianna Agron’s character about Vatican II, that she doesn’t think Church is in need of
change because, in her opinion, “Church is perfect the way it is”. Several scenes also show that the Reverend
Motherthe doesn’t like the fact that the new regime seeks to end such medieval punishments and atonements as
self-flagellation, crawling around on knees and other such quasi-sado-masochistic practices.

Novitiate, which had its premiere at this year’s Sundance Film Festival, is set to be released this fall, on
October 27.