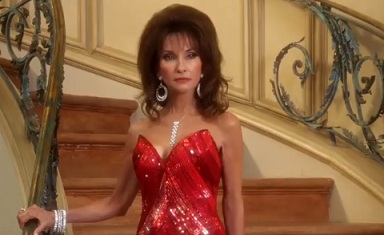 Progressive Insurance promotes its Snapshot tool in a series of three new commercials starring soap legend Susan Lucci. The spots, titled “The Turns We Take”, are identical until the moment Susan Lucci shows up and makes an announcement, providing thus three different endings.

The 30-second ads start with a couple arguing over getting the proper appreciation from each other, and Flo (the company’s fictional saleswoman), dressed ad a maid, telling them they can get the appreciation they both want with the Snapshot tool from Progressive.

The woman, entering the living room with a suitcase, announces her partner that she’s leaving him because he
hasn’t noticed her in two years and adds, when he reminds her that he has been in a coma, that she still deserves some appreciation. “Stop this madness!”, intervenes Flo. “If it’s appreciation you want, you should both go get Snapshot from Progressive. It rewards good drivers with big discounts on car insurance”, she adds. At this point, Susan Lucci shows up on the stairs, in a long elegant red dress. In the first spot, she says “I have also awoken from my coma”. The couple stare at her for a few seconds and then the man tells her that “it’s called a nap”.

In the second spot, she says “It’s a miracle. I can walk again!” and the man tells her to go back to her room, and in the third spot, she says “I have news. I’ve used most of your cellular data.” Angry, the man smashes his phone against the floor and shouts “Come on, Susan Lucci!”.

Susan Lucci, best known as Erica Kane from the daytime soap opera All My Children, is now 70 years old.

The Snapshot tool from Progressive, created with the idea that insurance should be based partly on how you actually drive, rather than just on traditional factors like where you live and what kind of car you have, is a little device that turns your safe driving into savings. Snapshot fits into your car’s OBD-II port, which most modern cars have, and every time you power up, it follows suit, allowing you to see the lights and hear a beep.

For every ride, it takes information about the time of the day you drive and how you drive, including any hard brakes, and then sends your driving information to Progressive. Your results are online, so in order to see them you just have to log in.