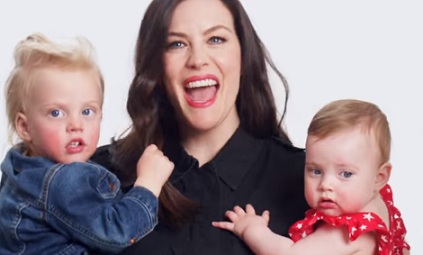 Gap celebrates motherhood with the launch of “Mama Said”, a short film starring and co-directed by Liv Tyler alongside Paola Kudacki in support of Every Mother Counts, a non-profit organization dedicated to making pregnancy and childbirth safe for every mother, everywhere.

The video, created to highlight the joys and optimism of motherhood, features Liv Tyler with her son, Sailor (2), and her daughter, Lula (9), model Candice Swanepoel with her 6-month-old son, Anacãn, model Coco Rocha, with her daughter, Ioni (2), and actress Jurnee Smollett-Bell with her son, Hunter (5 months).

They are all shown enjoying precious moments with the little ones, who are dressed in babyGap and GapKids, while in the background some of their statements about motherhood can be heard. “I have wanted to be a mother pretty much my whole life.”, “Every moment was exactly what I had hoped for.”, “I learned that I’m way stronger that I thought I was.”, “We are pretty incredible”, “It is the best experience I have ever had in my whole life.” – said the mothers, who also talked about what their mothers said and about this project.

The song used in the ad is “Let Your Love Flow” (originally by the Bellamy Brothers) performed by actress Jurnee Smollett-Bell.