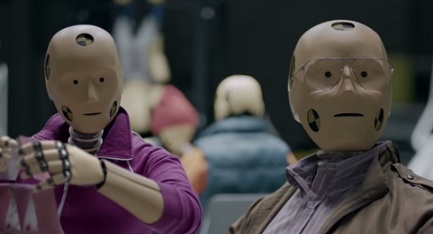 Find out why Toyota Crash Test Dummies aren’t needed as much anymore in one of the company’s latest commercials, released to promote the Toyota Safety Sense.

“Yep, and we’re not charging extra for it”, confirms his colleague, mentioning that a bunch of Toyota’s safety features, named Toyota Safety Sense, come standard. “Lane Departure Alert, Automatic High Beams, and more”, lists them the man, making the other express an opinion that is overheard by the concerned ones: the crash test dummies.

“With safety features like that, we probably don’t need as many of the dummies anymore”, he says while entering a sort of waiting room for dummies, who seem to get bored in there. His colleague immediately tries to “fix” the situation by inventing a reason why the dummies would not be needed anymore. “Because many of them are getting a well-deserved promotion”, he says, leaving the other with a big question mark: “A what?”. However, no crash test dummy buys that explanation, judging by their reaction.

Designed to help protect drivers, passengers, people in other vehicles on the road, and pedestrians, Toyota Safety Sense is comprised of multi-feature active safety packages anchored by automated pre-collision warning and braking.