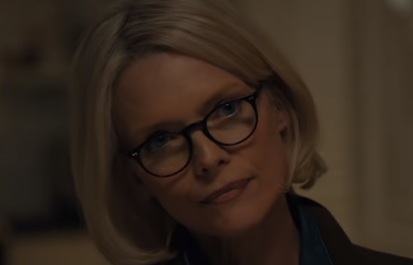 Michelle Pfeiffer – The Wizard of Lies

Robert De Niro and Michelle Pfeiffer are husband and wife in the upcoming biopic The Wizard of Lies, telling the story of Bernie Madoff and his Ponzi scheme.

A new trailer has been released, aiming to showcase some features of the stockbroker who scammed his clients out of
$65 billion, such as impulsive, when raising his voice at his 8-year-old granddaughter who asks a question about Wall Street at dinner.

The clip reveals the scene Madoff tells the truth to his wife and sons about the fraud he’s been committing and his Ponzi scheme, featuring his worried wife asking “What is a Ponzi scheme?”. In another scene, she tells her husband she tired of being hated. “You got yourself into trouble you couldn’t get out. Why does the world hate me?”, asks Pfeiffer’s character, deeply affected by the scandal she’s dragged into when the truth comes to surface and media chases her and fer family.

“They all think I’m some kind of a mastermind.”, she adds evidently annoyed by this fact and her husband’s reply is
to “take it as a compliment”.

The film, directed by Barry Levinson and starring also Hank Azaria, Lily Rabe, Kristen Connolly, and Nathan Darrow, is set to premiere on HBO on May 20.

The songs used in the trailer are “Supply Chain” by Confidential Music and a cover of The Police’s “King of Pain”.