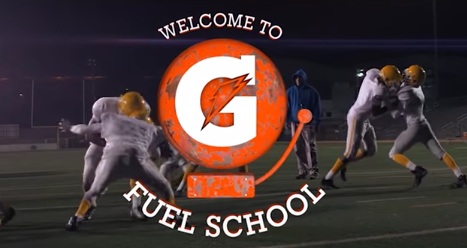 Gatorade takes you to the Fuel School in its new ad campaign, explaining you why carbs are important before the big game, why you need protein for recovery and why there are electrolytes in Gatorade.

“Why are carbs important to eat prior athletic activity?” – You get the answer in a 45-second spot, featuring football players training: “Let’s say you’re running back. Let’s say couch taught you a new play. You’re literally walking into the endzone. You won’t need a carb for that. A typical body naturally has 1500 to 2000 calories of stored carbs in the muscle, which is fine for a walk through. For intense activity lasting over an hour, you’re going to want have some carbs, like the Gatorade Fuel Bar, a couple hours before you play. Eating carbs like these prior to athletic activity you should fuel on the field for performance. Because when it comes to kick off and you’re going to bring those places to life, a couple of carbs go a long way. Cause why should a tackle be a letdown when it could be a touchdown?”.