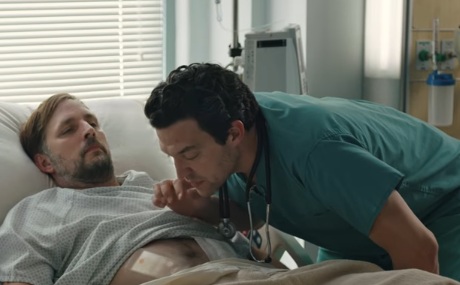 Snickers Commercial – Phone Inside a Patient

Snickers has launched a new ad campaign, with the tagline Snickers Satisfies, to hightlight that Snickers satisties
your hunger.

The 30-second spot titled “Recovery Room” and created with the idea that you’re careless when you’re hungry, features a doctor sitting next to the bed of a patient, in a recovery room, trying to apologize for what he did.

“I’m very sorry”, he says hesitantly. “And we’re gonna get the phone, his phone (referring to the doctor’s phone), out of you as soon as…”, says a woman, dressed in a grey suit. The next moment, the phone begins to ring. “I have to… I have to take this”, says the doctor recognizing the sound. “Sweatheart, I left the phone inside.. I’m having phone issues. Bye”, he says hurriedly, and then hangs up. “We’re going to fix this. Needless to say”, says the surgeon. At this point, Siri answers “Ok, resuming play” and starts playing a song.

The ad ends with the onscreen line “You’re careless when you’re hungry” and with the voiceover saying that “Snicker
Satisfies”.