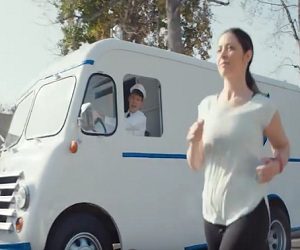 Silk has launched a new ad campaign to promote its Protein Nutmilk, Almond Milk, and the dairy-free yoghurt alternative.

Silk Man reprises his task and recommends to everyone the dairy-substitute products, which are excellent sources of vitamins, and calcium, with absolutely no cholesterol or saturated fat.

In the 30-second spot advertising the Protein Nutmilk, Silk Man, driving a camper, informs a young woman jogging, Becky, that protein goes great with jogging and lets go of the steering wheel to give her the drink. “It’s got 10 grams of protein”, he says while running backward, with his face to her. “That’s a lot”, answers Becky. “Oh, Becky, it’s the most”, he adds with enthusiasm. Immediately after this, he notices that his camper is ahead and realizes he must run to catch it. As the ad continues, viewers get to see Silk Man trying to get on the camper to stop it before it strikes a woman with a stroller, but not on the right side. “The door is on the other side”, he shouts as if expressing his thought out loud.

The voicer ends the spot by saying the world-wide, organic brand’s tagline, “Tastes Like Better”.