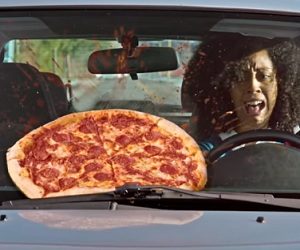 Papa John’s has released a new commercial, promoting its $11 deal for Ultimate Meats Pizza on Pan or Large crust.

The 30-second spot, titled “Drones”, features dozens of drones in the air, flying above a town and “delivering” pizzas by dropping them on the ground. Well, not all of them fall on the ground: a pizza falls on a guy’s head, another one falls on the windscreen of a car driven by a woman, and other pizzas falls into a man’s pool. Moreover, a drone enters a house by breaking the window to deliver a pizza to a group of friends, who obviously get panicked.

The spot ends with the voiceover inviting you to get Papa John’s Ultimate Meats pizza, with five different meat, on Pan or Large crust, for only $11. “We’re more than a pizza company. We’re a pizza family”, says Papa John (John Schnatter, the founder of Papa John’s Pizza), while behind him dozens of people wearing the restaurant chain’s uniform get together. Their tagline is “Better ingredients. Better pizza”.