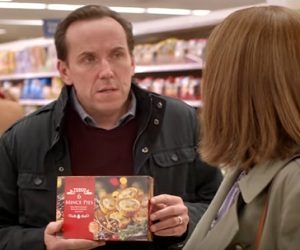 In the 60-second spot, Ruth’s character moans to herself while wandering through the aisles of a store, when she hears a Christmas carol, “it’s only November, my clothes still smell of bonfire”. She expresses her worries about all the things she has to do for the day, thinking about the tree, lights, decorations and presents. Her state of mind changes, though, thanks to the song and she runs with excitement through all the things she can get from Baileys.
Her husband, played by Miller, shows up at the end of the spot with a box of mince pies in his hands, asking her if it’s too soon. She answers “Bring it on”, inspired, most probably, by the festive music playing in the background.

Tesco, saying that “it’s never too early for mince pies”, informs you they’ve got everything you need to start planning and preparing for Christmas and invites you to “bring it on”.

The track used in the ad is Slade’s 1973 “Merry Xmas Everybody” from the album “Crackers: The Christmas Party Album”.