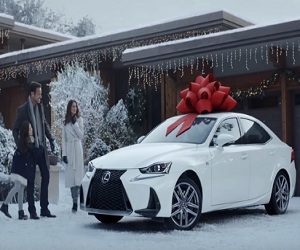 Lexus invites you to wish big this holiday, in its 2016 Christmas ad campaign, promoting its December to Remember Sales Event going on now at Lexus dealers.

The campaign includes five 30-second long commercials, featuring families whose wish to have a new model of Lexus comes true on Christmas.

The “Santa Letter” spot features a little girl writing a letter to Santa Claus saying that she has been a very good girl this year and asking him to bring her a Lexus. As she has some trouble writing down the desired model, her mother comes in and helps her, by writing it herself: GS F with Mark Levinson surround. “Just to be a little more clear, honey”, says the woman, drying the ink on the letter, and leaving her daughter with her eyebrows raised.
On Christmas morning, the girl and her parents find in front of their house a new Lexus GS F, packed up as a gift, with a bow.
“Mummy, our wish came true”, says the girl happily.

The commercial ends with the voiceover recommending you to wish big, if you’re going to wish, at the December to Remember Sales Event.