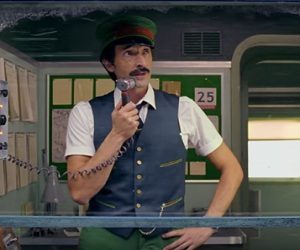 Adrien Brody is a train conductor in the latest commercial released by H&M, featuring the Christmas 2016 collection.

The spot, which is actually a short film, titled “Come Together” and directed by Wes Anderson, stars Brody as conductor Ralph, who informs the passengers travelling with the Coach 14 Winterexpress on
Christmas Day that, due to challenging weather conditions overnight in combination with mechanical difficulties on their scheduled route, they will get to the destination with a delay of eleven and a half hours, as the train has been directed to an alternate track.

“We realise this will interfere with many of your holiday plans and celebrations”, says conductor Ralph, who, in order to make up for this “terrible inconvenience”, invites the passengers at a “small, complimentary Christmas brunch” in the cafeteria section, at the rear of the coach, in 20 minutes.

In the meantime, Ralph and his assistant-porter, Fritz, manage to create a festive atmosphere by prearranging the cafeteria with a Christmas tree and Christmas decorations.

The songs featured in the spot are “The Little Drummer Boy” by Harry Simeone Chorale, “Happy Xmas (War is Over) by John & Yoko & The Plastic Ono Band With The Harlem Community Choir.