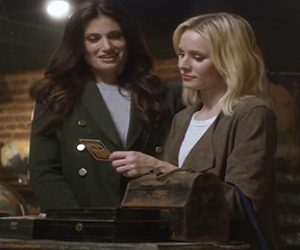 Kristen Bell and Idina Menzel walk down the Memory Lane in one of the latest commercials for American Express, released to promote the Small Business Saturday, slated for November 26.

The 30-second spot features the two actresses as they enter an antique store, described as “unreal” by Idina, and start looking around. “You never know what you’ll find”, says Kristen, who sees an Easy-Bake oven that reminds her of her first boyfriend. Among the items they see in the store there are also a headless hunk, walkie-talkies, and Anna and Elsa dolls. Eventually, they leave with their bags full, heading off to Kristen’s place to bake brownies.

The commercial ends with the voiceover inviting you to get together and shop Small Business Saturday.