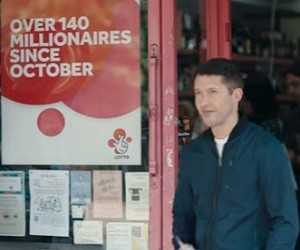 The National Lottery brings in James Blunt in their latest advert, for a new ad campaign titled #PleaseNotThem.
The 40-second spot stars the English singer and songwriter, who has proved he was willing to make fun of himself, saying: “I want to reach out the ordinary people, this country and say: Hey, you made it painfully ordering on the outside, but on the inside you’re beautiful, probably. So I developed technology to communicate with people through their mirrors”.
The next scene features Blunt in a laboratory, with a strange device on his head, connected to a mirror in which appears his face. He sings his well-known refrain “You’re beautiful”, but the James Blunt from the mirror has a terrible monster-like voice. Then, people in their homes are shown waking up because of James Blunt from the mirror, singing “You’re beautiful”.
The musician continues his speech, by adding: “it’s hard to overstate how much it would mean to the average person to get a visit from me. I mean, look, it’s James Blunt”.
The advert features, afterwards, a couple of scenes in which people lose their calm upon seeing Blunt singing in the mirror; a woman throws a pillow at him, another one causes a (minor) car accident, a man smashes a mirror with a fist in a public toilet. In addition to that, Blunt says: “I just need one big loss or win. And since has been over a hundred and forty millionaires, since October, well, things are looking ….”
The spot ends with a guy covering his ears with his hands in order to not hear Blunt singing in the mirror anymore, and with the campaign name, #PleaseNotThem.
The voiceover says: “Anyone can win with Lotto. Please don’t let it be him”.