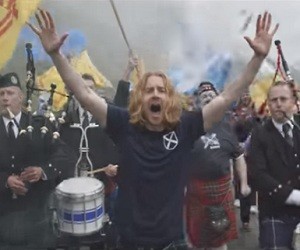 Even though Scotland haven’t qualified for the Euro 2016 football championship, the Irish bookmaker Paddy Power presents Scotland’s Euro 2016 anthem in an ad for which it has spared no expense, with a host of big name Scottish celebrities lining up alongside Michelle McManus, including The Krankies, ex-footballers Frank McAvennie and Andy Goram, and even a cameo from the Loch Ness Monster.
The 60-second video, released on May 28, during Champions League final, features the above mentioned celebrities marching through the Highlands drizzle and singing along that they don’t care Scotland won’t participate at Euro 2016 because they will bet on England to lose.
See below some of the lyrics:
“Where the hell are you from?
We’re from Scotland
Do you think we’re going to cry
Coz we dinnae qualify?
Forget it
Scotland won’t be there
Do you think we really care?
We don’t mind
We won’t despair
Coz we’ve got Krankies and lush red hair”