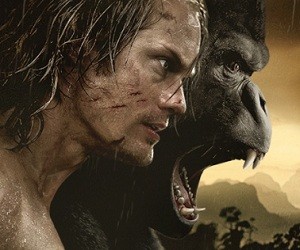 Tarzan returns to the big screen this year, in a new action adventure film distributed by Warner Bros. Studios: The Legend of Tarzan.
Scheduled to be released on July 1 in US, the film shows Tarzan after several years since moving from Africa to London, where he lives as John Clayton III, together with his wife, Jane Porter. Invited back to Congo to serve as a trade emissary of Parliament, he finds out that is a pawn in a plot conceived by the corrupt Belgiann Captain Leon Rom.
The cast comprises Alexander Skarsgard, who plays Tarzan, Margot Robbie, who plays Jane, Christoph Waltz, who plays Captain Leon Rom, Samuel J. Jackson, Djimon Hounsou, Casper Crump and others.
Directed by David Yates, The Legend of Tarzan is dedicated to Jerry Weintraub, one of the producers, who died on July 6, 2015, a year after the principal photography began.